If you have ever created a comment system for a website that supports nested replies you will know that one of the messiest parts of the code is taking a flat list of comments from the database, where usually you have a field for each comment that states what the parent comment is to that comment, and outputting a nested HTML structure where replies sit within their respective comments.

Normally, the method to deal with this is to convert this linear list into a node tree, replicating the relationships of the comments in a programming object which you can then recurse through and output.

The problem with this approach is that it’s hard to do and requires lots of separate functions and objects and you end up writing a thousand lines of code in order to do it properly and cleanly.

The alternative method is to do it procedurally, limit the nesting depth to a certain amount and just write absolutely crazy, insane kitten-killing, spaghetti code (with GOTOs) that no mother could love. It’ll get the job done quickly, but it will eat at your soul all the way from the hard drive.

I was not prepared to do it either way, so I invented a hybrid approach that achieves the end result in very little code and as elegantly as possible. The down side is that you should never code this way unless you know what you are doing!

The Tao of Programming

My code linearly traverses an array using a recursive function. That, in just about any programming school of thought is bad coding and not to be done! However, I am a hacker, and transcend to a skill level where all wrongs are also tools to be used and abused for art. This code works, and that is all that matters—there is no good or bad, just code.

Let’s initialise the code using an example table of data, like this. You could imagine that this has been pulled from an SQL query. Each comment has a parent field that will point to the ID of the comment it is in reply to, a parent of “0” will mean the comment is at root level.

First, we need to sort these comments. Sorting by date alone won’t really work because the newest comment might be a reply to an old comment in the middle of the thread. We need to first get the comment nesting sorted and then sort each branch of the tree by date.

The answer to this that I stumbled upon is that when you sort words alphabetically the presence of two words that start with the same letter is handled by comparing the second letters, and if they are the same, so on through the letters until some result is reached. I imagined an alphabetic structure below where each reply inherited the parent’s identifier, and each new branch increased the identifier in alphabetical order:

We achieve this by encoding the comment date/time to base 36 (A-Z, 0-9) which can easily be sorted. When a comment has a parent, we chain the “sort codes” together to make sibling comments share part of the same code, and thus appear next to each other.

Now we have a linear array, but sorted according to the nesting depth and time of the comment!

The final code (attached to this article) outputs a correctly nested set of comments: 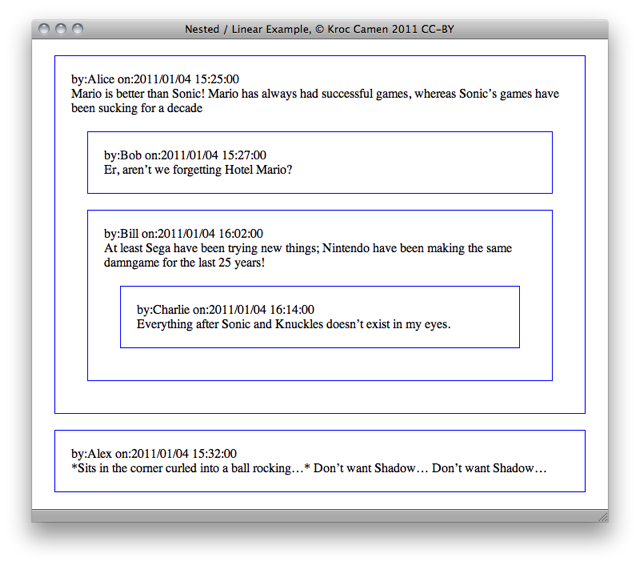 I hope this has been most educational.